There was a distinct chill in the air on Saturday night at the Boone Speedway, but it didn’t hinder the hot racing action.  Two drivers put their names in the record books for the first time this year, taking wins in the Modified and Hobby Stock divisions.  In the Stock Car class, it was a case of not knowing who was going to win as the cars came to the checkers. 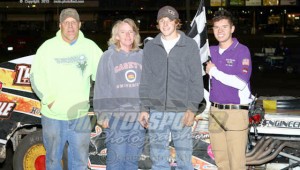 Shay Woods took home his first feature win at Boone Speedway in 2013 in the IMCA Modified division on Saturday, July 27.

Matt Sorenson got to the lead by lap four and held off his competition to the checkers, scoring his first win at the track this season.  Aaron Rudolph came from starting tenth to take the runner up spot.  Third went to Eric Stanton who came from row six, fourth was pole sitter Michael Powell, and Bethany, Missouri racer Lee Farmer completed the top five.

The Mod Lite feature saw Travis Stensland leading the opening laps.  He had a lot of company behind him however, and by lap six, veteran Ed Zehm had made his way past Stensland and into the lead.  Josh May then applied the pressure again on Stensland and took over second.  A red flag halted the racing at lap seven when Larry Sorenson rolled a couple of times between corners three and four.  Thankfully he was okay, the car was righted, and he drove to the pits.  When racing resumed, Zehm maintained his lead with May dogging him and in turn, the third place car of Andy Hennigar was doing the same to May. Dusty Masolini joined in the frey and was running a close fourth.   The final laps were a dog fight, but Zehm held his composure and scored the win.  Hennigar took the runner up spot, Masolini slipped past May as they were scored third and fourth and Travis Stensland rounded out the top five.  This was Ed Zehm’s second win at the speedway this year.

Randy Roberts took the lead early on in the 18-lap IMCA Northern SportMod feature.  He was challenged by Johnathon Logue and Ben Kates much of the race, but it was futile with Roberts taking the win, his third of the year.  Kates was the runner up and Logue finished third.  Fourth went to veteran racer Rick Ringgenberg and Lynn Brockett was fifth.

The ground pounding IMCA Modifieds were up next for their 20-lap feature.  Matthew Meinecke took off from his pole position and into the lead at the drop of the green.  Shay Woods took over the top spot by lap four when a yellow flew.  He had little trouble maintaining the lead on the restart, but now it was Kyle Brown on the march as he slipped into second around Meinecke.  Mooresville, North Carolina driver, Kyle Strickler, “The Topside Tickler”  was also doing his thing on the top of the track, and had made his way into fourth.  As the laps wound down, Meinecke would have misfortune strike, allowing Strickler around as well as Jammin’ Jimmy Gustin.  Woods then motored home to the win, a comfortable margin ahead of second place finisher Kyle Brown.  Gustin, who started twelfth, took third place,  Jon Snyder came from eleventh to finish fourth, and Kyle Strickler made the top work and finished fifth.  Shay Woods put his name into the record books for the first time in 2013.

The IMCA Stock Cars produced again with an exciting 18-lap race to end the night.  Eric Brown and Mike Goldsberry battled it out in the early going, Goldsberry finally establishing the lead at lap five.  Cory Bushnell had been running in third in an attempt to catch the front runners but he soon had company.  Donavon Smith had come from starting tenth to run in fourth and Jay Schmidt, who had started sixteenth was up to fifth!  In the later portion of the race, Goldsberry was doing his best to hold off Smith and Schmidt, and at one point,  they went three-wide down the backstretch.  The three continued to battle to the very end, each of the three holding the lead at some point.  The victor at the checkers this night was Schmidt as he out ran Goldsberry, who had to settle for second.  Donavon Smith took third over Eric Brown and Corey Bushnell finished in fifth.  This was Schmidt’s fourth win at Boone this season.

Next Saturday night, August 3, there will be a candy toss for the kids, racing in all regular divisions plus the Karl Chevrolet Dirt Trucks.  Hot laps at 6:45 and racing at 7:30. 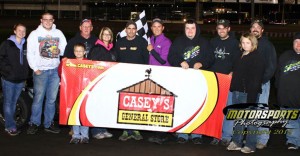 August 18, 2012 Sprinkles fell at the Boone Speedway shortly before race time, but with diligent and constant packing of... read more 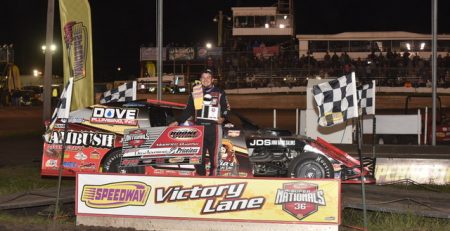 BOONE, Iowa (Sept. 7) – A parade of states raced its way into the main event in Friday night... read more